"Modern-day witch Cassie Moore’s cozy life turns upside down when her friend foresees the wrecking ball that threatens to destroy Cassie’s home and workplace. But Cassie isn’t giving up without a fight. She casts a well-intended spell meant to save her apartment and her job. But magic is unpredictable, especially when her friend casts a little charm of her own that has Cassie lusting after the man she desperately wants to despise.

Jack Quinn has had his eyes on Lakeside Books for years, and he couldn’t be happier the owner is finally ready to sell. He has big plans for the cozy waterfront property, but he didn’t expect to care about the store or its employees. And he never imagined he’d be drawn to a certain brown-eyed saleswoman." 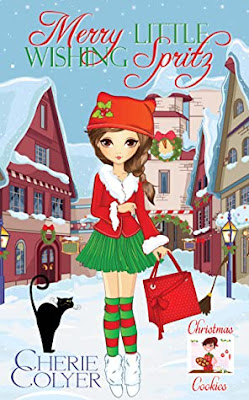 I hoped this book would be a cosy Hallmark-type Christmas movie, and thankfully it did not disappointment, and the added bonus was it only took me about the same time to read it as it would to watch a movie.   I love to squeeze in as many Christmas books as I can between now and the end of December, and this kicked off my Christmas reading for 2021, and left me suitably fuzzy with festiveness!

It isn't always easy to get good solid characters in such few pages, but Cassie, Peyton and Jack were believable, and I felt as if they had backgrounds and hadn't just sprung out of thin air to make a story.  I had no idea what a wishing spritz was, but it turns out to be a cookie imbued with a little magic, which sounds both delicious and charming.

Sometimes with these short cosy Christmas books, the female character can be a little too much of a push over, but Cassie was feisty but not overly so, she stood her ground for the right reasons, but also admitting when she was wrong.

There is also a very sweet background element to the plot.  Cassie is obviously keen to keep her apartment and job, but there is also a community aspect as to why she doesn't want the bookshop to close.

If you’re not a fan of paranormal/magic novellas I don't think this should be you off reading it.  The magic moves the plot in places, but it doesn't really move it forward.  Most of what is in the book could easily happen without the use of magic, think of the magic as the little sprinkles on top of a hot chocolate!

There is an extra little surprise in this book too, but I don't want to give away any spoilers, so if you want to know what other little secret is hiding between its Christmasy covers grab yourself a copy and indulge in some festive magic.

Posted by Tracy Welham at 10:51 No comments:

Review: The Lady's Guide to Deception and Desire by Emmanuelle De Maupassant

"Disowned by her oil tycoon father, debutante Rosamund Burnell is in a fix. With limited funds, and a long way from Texas, the answer seems obvious. Pretend she's still a wealthy catch, to ensnare an eligible English bachelor.

Meeting the Duke of Studborne, it seems her prayers have been answered. The silver fox is in need of an heir, and soon seems besotted.The only spanner in the works? Her growing attraction to the duke's very proper, very honourable and very penniless nephew, Benedict.Rosamund tells herself she needs to think with her head, not her heart! But the Duke's motives for courting her are not what they seem, and Rosamund is suddenly caught in a trap.Are the mysterious disappearances at Studborne Abbey mere coincidence? Or does something wicked lurk within the ancient monastic walls? Rosamund must uncover the truth, and only one person in the abbey can help her. The annoyingly principled Benedict!" 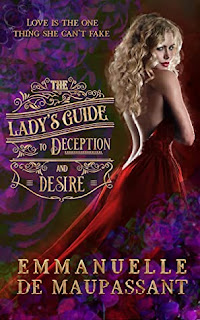 Disowned by her father, Rosamund Burrell and her mother are forced to turn to deception in order to avoid becoming destitute.  When they meet Benedict Studborne, and he invites them to stay at the wonderfully gothic and mysterious Studborne Abbey they see a potential end to their troubles.

However, their deception entangles Rosamund in Lord Studborne's web of lies spun from the all-consuming grief over the death of his wife, Violetta.  Whilst Benedict struggles with his desire for his uncle’s bride to be.

Lord Studborne’s nephew, Benedict is an incredibly likeable character.  He is shy and endearing with a charming hidden strength.  Rosamund is a gentle and caring young lady who loves her mother despite her sometimes overbearing manner.

The characters and plot were superbly written and from about chapter 9 I had suspicions that Lord Studborne was not quite what he seemed to be.  From this point I was swept away with the underlying darkness of the story, which was so compelling, whilst loving the blossoming romance between Rosamund and Benedict.

The story has a sweet, sensitive, and passionate ending.

Posted by Tracy Welham at 13:33 No comments: